Violinist Anne-Sophie Mutter brought a full program of Beethoven chamber music to San Francisco’s Davies Symphony Hall, January 27. it was a stunning event which demonstrated that chamber music, in this case two trios and one quartet, is not something slight or limited in its musical character or expression. This music being all Beethoven, that thought should be underlined and in bold-face type. It was an enormously successful performance both in the artistry of the musicians and the thrills experienced by the audience. 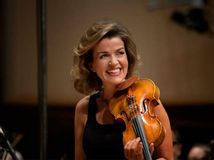 Among her good works, Ms Mutter is dedicated to the development of young artists. The three musicians who played with her in this performance all began their careers with the Anne-Sophie Mutter Foundation. These artists include: Vladimir Babeshko, violist; Daniel Muller-Schott, ‘cellist; Ye-Eun Choi, violinist. In addition to touring with Ms Mutter, each one appears independently with distinguished orchestras around the world as well as their extensive touring performances with Ms Mutter through Europe, the US, Asia, and South America. Together with Anne-Sophie Mutter they achieved the remarkable effect of becoming what Ms Muller describes as “this one huge string instrument in which to tackle the profoundly philosophical string trios [in E-Flat major, Opus 3 and in C minor, Opus 9, no. 3] and the Harp Quartet [Opus 74] by Beethoven.”

String Trio in C minor (Opus 9, no. 3), written 1796-98, is a forceful, tempestuous work which contrasts precise decorum with drama, dissonance, and defiance toward the conventional. Although early in his career, Beethoven is already Beethoven. A passionate, almost anxious expression emerges. Beethoven, central to the tradition of Western classical music, is always innovative and even seems to laugh musically at what his audience would expect serious music to be. His minor mode music shifts to a calm, quiet major mode to end the Trio in a whisper.

A special delight of chamber music is that the audience can easily watch the music move from instrument to instrument, see the rhythm overlapping or interrupting from one instrument to another, experience the force when they suddenly play together. The String Quartet in E-flat major, Opus 74, 1809, offered many opportunities to see the instruments run after one another, skip rhythms, and finally catch up to express a musical energy. The Quartet ends with a view of too-many-clowns-running-out-from-too-small-a-car which lifts this listener’s heart when Beethoven creates that event in his symphonies. This was a splendid performance of a piece with deep philosophy of both fear and joy.

String Trio in E-flat major, Opus 3, 1796, reminds the listener of the Classical world’s sounds that surrounded Beethoven as he moved into the physical and imaginary world of Mozart. Order and clarity are the rule. Beethoven was able to assimilate those values into his own deeply colored, sometimes wild, always Natural while thoroughly human world. Which is, of course how Mozart had created Mozart, assimilating what was into what he was, too. A favorite portion of the lengthy Trio for this listener was in the second Minuet when the violin soars into space while the others accompany with a steady, repetitive rhythm and sound. The Trio is clear and present Beauty. 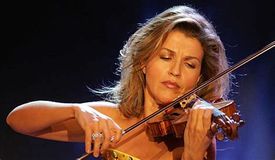 The audience knew it was hearing music that had both beauty and meaning. We all stayed on our feet applauding. The musicians, after four curtain calls, relented and repeated the Scherzo of the first trio. The moment was rhapsodic. Ms Mutter will return June 4-6 to perform Beethoven’s Violin Concerto with the San Francisco Symphony with Michael Tilson Thomas conducting. She is one of the Artists-in-Residence for this Beethoven250 Birthday festival.

Fashion note:  As reported in Beethoven & Mutter, Part I, Ms Mutter is noted for her beauty as well as her trademark strapless gowns. For this chamber music performance, she kept the strapless concept but took a creative step. She appeared wearing pants fitted to the legs and a strapless top. The pants had black and silver designs. The top was a soft yellow color. Fitted close to the body, it had a short skirt beginning at the waist, divided on the sides, and extending just over the hips. She wore black shoes which had very high, narrow heels and appeared to have a platform under the metatarsal. Fantastic. 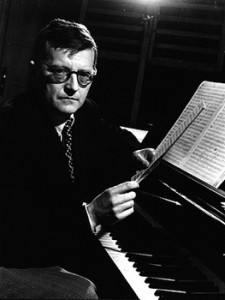