Let us begin with a confession: this writer is one who recoils just a bit, one step back, upon hearing that a symphony will be accompanied by multi-media. Believing that music is enough on its own and that Bartok, Debussy, Ravel are complex enough to require and reward careful, focused listening, yes, a step back is in order. The performance of Maurice Ravel’s one act opera, L’enfant et les Sortileges, June 28, changed that outlook. It was an exciting performance in which all the many elements worked together so well that it is now difficult to imagine the music without the entire SF Symphony, the Symphony Chorus, the Young Women’s Chorus, the San Francisco Boys Chorus, the nine vocalist soloists, and the phenomenally attractive, animated figures of armchairs, frogs, bats, trees and other natural creatures, including the enormous hand of Maman, a mother who has had it with her child.

The story in the opera was written by Colette, the popular French author whose marvelous writing about cats, love, nature, growing up, getting older can capture a reader’s attention until every last page is read and re-read. The history of the opera’s creation includes World War I. The Director of the Paris Opera suggested Colette write a libretto for an opera. He also suggested various composers; Colette was sold on the project as soon as Ravel’s name was mentioned. Ravel, however, was at Verdun, in 1916, a place and battle whose horrors define that war. The composer was a driver in the Motor Transport Corps. Colette’s story was sent to Verdun. What could they be thinking? It was lost. In 1917, another was sent. Ravel was demobilized and able to study the story and begin thinking of his music. The opera’s premiere was at the Theatre de Monte-Carlo, Monaco, in 1925. 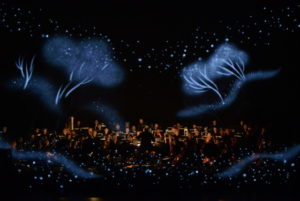 Photograph courtesy of the website of artist/animator Gregoire Pont from the premiere of L’enfant et les Sortileges, Lyon, France, 2016.

The title of the story can be translated in many ways; The Child and the Magic Spells suits what happens. On the stage there is a thin curtain hanging between the back of the conductor and the area nearest the audience (down stage). The Child, a boy brilliantly played by mezzo-soprano Isabel Leonard wearing shapeless shorts, tee shirt and hat, is reprimanded by his mother for failing to do his home work and messing up the house and his work book. He is not going to have a nice dinner, and he feels rebellious. He would like to pull the tail of the cat and, if he could find one, cut the tail off a squirrel. A giant hand appears on the curtain in white outlines. The Child cowers a little before it, but then he continues his rebellion. Two armchairs appear on the curtain (sung by Marnie Breckenridge and Michael Todd Simpson). They are the first of a series of objects and animals which are projected onto the curtain and enacted by the singer soloists. Each character describes the ways in which the child has harmed it. When the scrim is covered in images of insects moving up and down in columns, one sees a dragonfly flitting across the vertical rows. Then, a singer stands alongside the human sized image of the dragonfly’s wings. He (Jennifer Johnson Cano) sings of the painful loss of his mate, killed by the Child. There are trees (Mr. Simpson) which have been stabbed by the child’s knife. There are two cats who love and fight (Kelly Markgraf and Ginger Costa-Jackson), a Wedgewood tea cup (Ms Costa-Jackson), saucer, and tea pot (Ben Jones) which the Child has broken. Bats (Nikki Einfeld) fly away, terrified by the Child. All sing through the presence of the soloists who interact with the gracefully drawn images. Frogs swim across the ceiling of the concert hall. 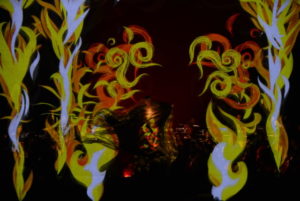 Anna Christy, soloist, stands on a block and sings Fire. A long, loose cloak drapes her while changing colors of orange, red, yellow are projected on her and all over the screen. The Child has not only transgressed by playing with the fire, but also endangered the whole house. Fire tells him “Good Children get warm, Bad Children get burned.” Ms Christy sings the role of the Princess in a fairy tale. The boy wants to be her hero. He says, “If only I had a sword,” and a knight’s helmet with great plumes appears on the screen exactly over his head as the sword is “drawn” into his hand. The Princess sings, “You are too weak” and “how long can a dream last?”

The creatures and objects are tired of being oppressed by the boy. They join forces and fight with him. A general impression could be that the child realizes it is safer to be good than to be bad. In the libretto, the child sees that a baby squirrel’s paw has been injured. He decides to bind its wound. He also observes that the others have each other and love, but he is alone. Suddenly, he calls out “Maman.” The others recognize this as a magic word that the child uttered as he did something good. The action of the Child caring for the squirrel was not included in this performance. So, having the other soloists begin to sing that the child is “wise” and good, was startling. He’s not good, not yet. Seeing the Child attack every aspect of nature and objects of civilization including china, a clock, furniture, and learning may look different to today’s audience observing mass extinctions; extreme hurricanes, fires, floods; and the melting of the Arctic thanks to human’s lack of care for their own world than it did to audiences and artists who had survived and witnessed the gross destruction of human life in World War I. The Child yearned for his mother at a time of crisis; one might say he reaches out for the good.

The projections were created by Gregoire Pont, a French artist who began to study animation at age 8. He calls his work Cinesthetics described on his website as”in complicity with a group of musicians, he draws and animates live, creating a unique experience where music and motion interplay.” Among his other works are Ravel’s La Mere L’Oye (Mother Goose) presented in London’s Festival Hall and the Paris Philharmonic; Shonberg’s Gurrelieder presented in Gothenberg; Debussy’s La Mer presented in Tokyo. The singers interacted with the projections by becoming part of the picture or striking toward the screen to make the image change or singing notes that made the images change rhythmically. It was a fantastic performance, both visually and musically inspiring.

Conductor Martyn Brabbins was a cheerful sorcerer bringing forth beauty, curiosities, musical tales and philosophy. He is the Music Director of the English National Opera. The first half of the concert evening included works with themes or images related to childhood. Pianist John Wilson performed three solo selections from Debussy’s Children’s Corner. With musicians from the SFS, he performed Debussy’s La Plus que lente. All were beautifully performed and delightful. An SFS chamber group including Helen Kim, violin; Matthew Young, viola; Sebastien Gingras, cello; Sayaka Tanikawa, piano, performed Faure’s Allegro molto from Quartet No. 1 in C minor, Opus 15. Debussy’s Noel des enfants qui n’ont plus de maisons (A carol of the homeless children, 1916) was a  cri de coeur sung with appropriate pain and passion by Ginger Costa-Jackson with pianist Peter Grunberg. Mr. Wilson and Mr. Grunberg played the piano four hands work by Ravel, The Enchanted Garden, from La Mere L’Oye. The entire concert was an Enchanted Garden which thoroughly charmed, enlivened, and lifted the audience sending all home with sparkles in their eyes. 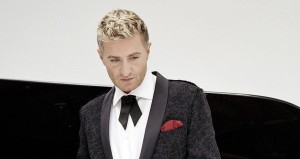 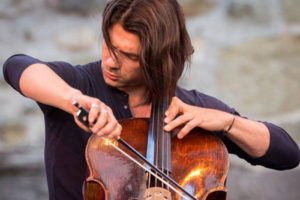 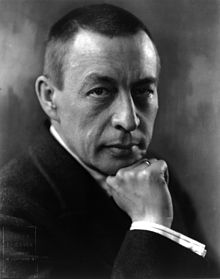