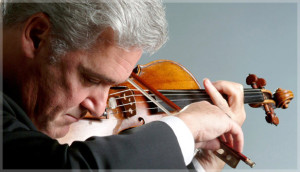 The headline tells it all; the writer will elaborate briefly for readers who have not heard Pinchas Zukerman play or who wonder about Beethoven and the violin. However, the  available superlatives all fall away in remembering this musical experience. On January 26, 2014, Pinchas Zukerman was both the conductor and the solo violinist for London’s Royal Philharmonic performing three works by Beethoven: Overture to The Creatures of Prometheus; Violin Concerto in D maj; Symphony No. 5. One could say it was a celestial experience if it were not that Beethoven insists upon being an earthling. The music rips right into whatever it means to be human, the myriad things it means to be human, and celebrates life here on earth. The people wanting to build that foul pipeline of tar sands oil across American lands could never have heard Beethoven. Oddly enough, Beethoven’s music somehow encompasses even them. Mr. Zukerman’s low key approach to conducting is deceptive. Those who have witnessed famous adults and highly skilled ten year olds dramatically waving their violin bows in order to tell their audience when they are playing something important and when they are ready for an ovation might find the absence of dramatics disappointing, but his style allows the music to be the only focal point. Mr. Zukerman’s playing is masterful, a joy. In the lengthy concerto it ranged from exquisite simplicity to complex, virtuosic performance that left one breathless. The concerto’s last movement is a delightful dance. The theme sounds like fun, but it is able to be playful because it dances on top of such musical complexity and Beethovenian energy. One moment in Mr. Zukerman’s performance particularly revealed how thoroughly he lives in the music. His back to the audience, he conducted with spare movements and played. He then turned toward the audience, lifted violin to chin, bow to violin, and began to play his solo part. The time between is what fascinated me. He knew physically exactly how long he had to make that 180 turn and begin to play. No rush. Mr. Zukerman would be great at the most challenging jump rope routines. Everyone has heard the 5th Symphony or at least knows how it begins. It was the theme for the Huntley/Brinkley news decades ago. It was the Victory symphony in World War II. The problem with something that we all think we know is that we often forget to listen to it. The Royal Philharmonic and Pinchas Zukerman’s performance of Beethoven’s 5th Symphony transmitted the greatness of Beethoven’s sense of life. It is possible to hear it telling the tale of human being, alone and together. The music stretches the reach of what we want to think of as Western Civilization, of Culture with the largest Capital C, of human potential good and bad. At the end, when the clowns, chimpanzees, whales, toddlers, miners, mothers, trees, lilies, and weeds, are all in the music, exuberant with life moving in every cell, the listener is elevated to thrill in being. This listener levitated above the crowded staircase out the symphony through the traffic to find her car had been smashed and robbed. This listener, reminding herself that even that was included in the 5th Symphony, even those who want to build the pipeline, was thankful to have heard it.