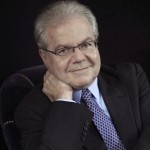 Emanuel Ax performed a magnificent, wonderful, loving recital of works by Bizet, Rameau, Debussy, and Chopin at the Davies Symphony Hall, San Francisco, January 11, 2015. There is little to write about his performance except that it was wonderful. He is a great artist. His presence is low-key. There is no fuss and bother, no gesture that is not part of playing the piano with an understanding of the music that goes far deeper than the notes and with technique that has mastered every nuance, tone, color, rhythm. Like a baseball player who is hitting better than .300 for the season and still is the first one in the park to take batting practice, Mr. Ax could be seen from Davies’ Hall’s foyer over the SFS closed circuit t.v.s practicing until the ushers were forced to open the doors to let the audience be seated. His selections were not the usual fare for a pianist’s performance. He opened with Bizet’s Variations Chromatique de Concert. A dazzling display of musical color, it is also an astonishing virtuoso challenge. From the beginning, Mr. Ax showed that he was the Master and could make the piano would do whatever amazingly difficult turns the Master required. Dismissed as merely virtuosic by a music commentator who didn’t get it, the piece is a musical joy. Shall I point to center field and hit the home run exactly there? Ok, that’s what I will do. Shall I jump up and, while staying up there, cross my feet front and back six times just to show that a human could do such a thing? Ok, I’ll do that. And, I will do it beautifully because beauty counts.The Rameau selection, Suite in G major/minor from Nouvelles Suites de pieces de clavecin, was also a splendid surprise. It is full of invention from this late 17th-early 18th century composer. Each piece of the suites called for either a specific, unusual action of the pianist or musically suggested a image in action. For Les Tricotets (The Knitters) the pianist’s hands play closely together as though the melody is being unfurled like a scarf from knitting needles. La Poule (The Hen) has the music suggest the bird. However, by describing them in these brief phrases I am in danger of simplifying music which experiments with harmonies and rhythm as well as the physical act of making music. Approaching Debussy, the listener may anticipate being in a more familiar, early 20th century, musical world. Debussy never disappoints until one thinks it possible for him to be predictable. The selections were Estampes (Prints): Pagodes, La Soiree dans Grenade, Jardins sous la pluie. They were elegant, mysterious, beautiful in a way in which Debussy helped to teach us to find beauty. The delicate Pagodes was inspired by Debussy’s fascination with Japanese art which was just coming to France and captivating the Impressionist painters, as well. At times it suggested a small, graceful water insect which can tip toe across the surface of a pond. La Soiree dans Grenade had a snip of jazz inflection with its light touch of a Spanish accent. Debussy’s Homage a Rameau, in addition to being a fitting addition to the Rameau on the program, is a graceful and rhythmic tribute to the composer Debussy greatly admired. L’Isle joyeuse is completely extraordinary. Listeners whose closest association with Debussy is Prelude to L’Apres-midi d’un Faune especially should seek this music. It seems to capture all of Debussy’s love of nature: plants, water, strange and famiiar animals. It is an Eden one can almost touch, but only almost. After the intermission came Chopin. Mr. Ax chose Four Scherzos, written from 1832-1842. The great composer lived such a brief life, 1810-1849, that the time span of the Scherzos is significant. I will not describe them. I am still overcome by their intensity, range of emotion, magnificent and purposeful virtuosity. Each one had its own terrors and passion and its own troubled peace. Find them and listen. To find Emanuel Ax in concert, one need not travel far. He will play with orchestras in New York, Boston, Washington, D.C., Atlanta, Cincinnati, St. Louis, Dallas, Los Angeles, Vancouver, in addition to an extensive European tour. Hear him live.Photos, top, Emanuel Ax; below: Bizet, Debussy, Rameau, Chopin