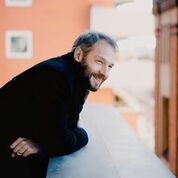 Conductor Dima Slobodeniouk        It is a day and a half since we attended the stunning matinee performance, January 23, 2020, of the San Francisco Symphony  with violinist Sergey Khachatryan and conductor Dima Slobodeniouk. We are still breathless. The SF Symphony, always outstanding, truly played above any symphonic group could in a normal world. The musicians seemed to rally together and just go up into the music. The program selections, an astounding conductor, a soloist who plays like an angel: it was an inspired performance which inspired the whole audience.

The program opened with Con Brio, by contemporary composer, Jorg Widmann. It was totally original, a delight. The conductor, Dima Slobodeniouk, made comments which contributed greatly to the audience’s enjoyment. He advised us to imagine a page of music. Then, see it torn into many pieces. Think of it arranged as the pieces fell. That is the composition of it. While it may also be true, as the program note informed us, that it reflects the composer’s devotion to Beethoven, that is not so obvious. Widmann has found ways to make the symphony instruments make sounds which are not mechanical or electronic but fascinating. There are whooshes. There are residual sounds which might have gotten brushed aside and then picked up again. Rapid clicking and tapping notes seem to be falling downhill, maybe falling off of a music stand. The basses become percussion. The most musical music comes from the trumpets. The sounds make a curling shape. The absence of sound creates suspense. There is an odd matter of rhythm in the opposition of sounds from one section of the orchestra to another. It is running, accelerating and then running down. The woodwinds announce butterflies. We hear air coming out of tires. The mysterious sound of light; it is over. 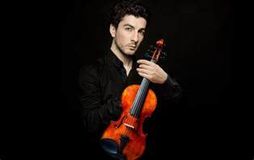 In the program note by Michael Steinberg, the late, very great music writer, he describes Sibelius’s desire to be a virtuoso violinist and his failure to achieve that dream. Sergey Khachatryan is the violinist Sibelius yearned to become. With the SFS, he performed Sibelius’s Violin Concerto in D minor, Opus 47 (written 1902-1905). This is a huge masterwork. Khachatryan plays it as though the music lives through every fiber of him. If it is true that this concerto was written to embody the violin’s possibilities and Sibelius’s grief at losing the experience of playing at the height of the music the violin could achieve, it also expresses what music can be; the desperate struggles and love of every human journey. I have heard this work in recordings. This performance – as is true of the performance of Beethoven’s Symphony No. 7 – demonstrated how much more there is in the experience of being there as the music is performed live. I am sure I heard notes that I missed hearing a recording. The great overlaying of rhythms in new dimensions of time which also created physical space between the sounds and between the instruments was eye and ear awakening. The concerto demands the violinist play as a soloist for much of the work. Khachatryan is a charismatic stage presence whose playing of this fiendishly difficult work is nothing less than angelic. Although I have reflected on the superiority of being there while the music happens, I will still search for the recording of Sergey Khachatryan performing this concerto with the Sinfonia Varsovia to try to recreate this experience. Readers, you might do that, too.

This year is the 250th anniversary of Beethoven’s birth. The San Francisco Symphony is honoring the great artist whose work is at the center of Western civilization with multiple programs of his works. Symphony No. 7 in A major, Opus 92, (written 1811-1812) is grand, enormous, and seems to encompass the world. There is not a phrase that is slow. It goes from grandeur to energy to harmonies one might wish to stop to hear again. And again. In fact, in its premiere concerts, the audiences demanded the second movement encored right then. Familiar though one might think it is, it is powered by the creation of new rhythmic patterns, new melodies, daring repetitions, even a creative use of “off key” sounds.  When this explosive beauty comes to an end, it is impossible to believe that the energy has gone. The edifice structured with intense care soars with rhythmic force. The last movement lives fast and loose, a herd of wild horses on the plains. It left me and the entire, packed to the ceiling audience out of breath, cheering the SF Symphony and Slobodeniouk, lifted up out of their chairs by the extraordinary force of music, something physical we felt but could not see or touch.