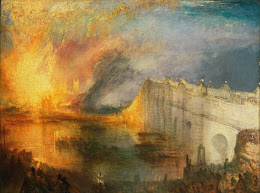 J.M.W. Turner’s paintings and watercolors make an eye  opening exhibition at the de Young Museum. It opened on June 20 and stays up through September 20. It is a privilege to be in the same room with these great works created in the last fifteen years of Turner’s life and rarely seen in the US. He was born in London, 1775, and died in 1851. This is the first exhibition devoted to work from this period, 1835-1850. It is being shown at the Tate Britain, in London, the Getty Museum, in Los Angeles, and here at the de Young. It is not to be missed. Although many of the works have subjects from mythology and religion, it is the atmosphere of the natural world which most interests Turner. Even in the paintings which have titles from a mythological or historical event, what one sees in the painting is swirling color and light. Titles such as Rough Sea with Wreckage, Burning of the Houses of Lords and Commons, 16 October 1834 (pictured above), Fiery Sunset, Fire at the Grand Storehouse, Tower of London reveal his true focus on forces of nature: fire, storms, bodies of water, clouds. He was admitted to the Royal Academy at age 14 and had his first exhibition in 1802. Throughout his artistic life, especially in these later years, he was an artist only like J.M.W. Turner. It is said that he influenced modern artists such as Monet and Rothko. While that is possible, it is important not to reduce him to be only a forerunner of Impressionism or Abstraction. Fascinated by light and the atmosphere, he did something so strange: he painted things that have no shape, like fire, fog, and wind. The exhibition, J.M.W. Turner: Setting Painting Free, has 65 works. There are large oils on canvas and some smaller water colors. It includes paintings meant to be hung side by side which are now reunited for this exhibition. As one enters the galleries, one sees a full wall taken up by a video of ocean waves. It is a wonderful way to enter Turner’s vision of a world in constant motion.   Elements of nature, the sunlight of Venice, the watery atmosphere of London are the real and yet evanescent subjects of this great artist whose work is a category of its own. The de Young, in Golden Gate Park, is open Tues-Sun, 9:30 a.m.-5:15 p.m. Fridays, now through 11/27, until 8:45. Closes 4 p.m., July 4th. Admission to the exhibition is $20, Tues-Fri; $25 Sat, Sun, & holidays; $17and $22 for Srs.; $16 & $21 for Students. Members free. 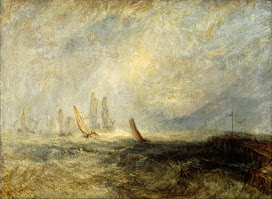 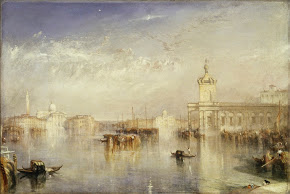 Pictures: at top: Snow Storm–Steamboat off a Harbour’s Mouth Making Signals in Shallow Water, and going by the Lead. The author was in this Storm on the night the Ariel left Harwich, 1842, oil on canvas; below article, Left, Fishing Boats Bringing a Disabled Ship into Port Ruysdael, 1844, oil on canvas; Right, The Dogano, San Giorgio, Citella from The Steps of The Europa. 1842, oil on canvas.