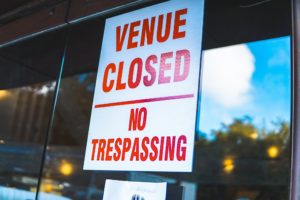 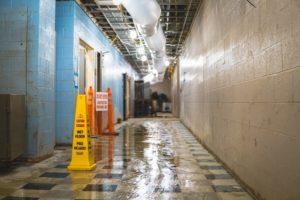 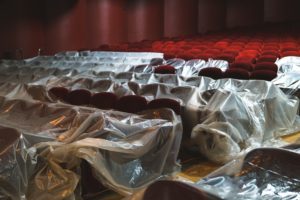 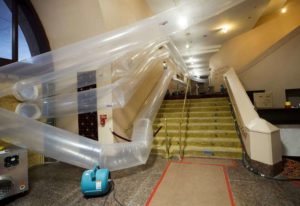 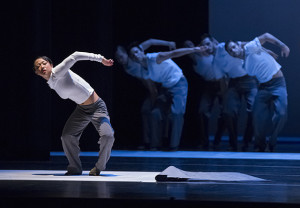 The opportunity to return to Houston’s Cullen Theater at the Wortham Theater Center for the closing concert of Dance Salad was one the Hedgehogs did not want to miss. The program offered four dances we had not yet seen as well as five that were certainly worth a second look. Yidam, choreographed by Ihsan Rustem, for NW Dance Project of Portland, OR, achieves the choreographer’s vision of constant motion. The dancers are on the run continually. They fall and are recovered by others. It has elements of Contact Improvisation, the movement method in which dancers play off of each other’s weight and momentum. The dancers can do everything and could laugh off any Decathalon challenge. A striking moment in the dance was the one of stillness: the dancers hold positions in profile to the audience with the lighting showing them in silhouette. Ihsan Rustem was born in London, trained at the Rambert School of Ballet and Contemporary Dance. His work is in repertories including companies in Belgium, Germany, Switzerland, Turkey, the US. Photo: Blaine Truitt Covert. 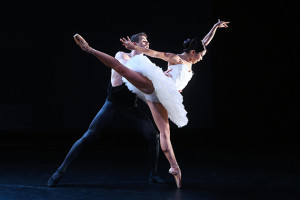 Black Swan Section is the third part of Beasts, choreographed by Nicolo Fonte for BalletX, Philadelphia. Richard Villaverde danced the role of the Black Swan. Bare chested and wearing a black tutu, he performs a powerful, emotional solo. His movements alternate between the Swan’s classical ballet and movements revealing his desire and perhaps uncertainty to take this role. His performance throughout the dance was both technically excellent and expressive of the Swan’s inner self. Andrea Yorita portrayed the White Swan with power and elegance. Her Swan is offered partnership with Male partner in Black, Zachary Kapeluck, and Male partner in White, Gary W. Jeter, II; both were exceptional dancers and performers. Perhaps she knew she was the other half of The Swan with the Black Swan. She seemed most drawn to him, but she is distracted by dances with the two male partners. In the end, all three exit leaving the Black Swan alone. Photo: Bill Hebert 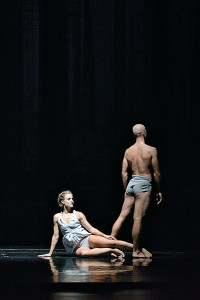 Faun is a duet choreographed by Sidi Larbi Cherkaoui for the Royal Ballet of Flanders, Antwerp, Belgium. The program notes the piece uses Debussy’s Prelude to the Afternoon of a Faun, and additional, unnamed music by Nitin Sawhney, and mentions Mallarme’s poem and Nijinsky’s Faun. While the program notes that the dance “examines the animalistic nature of human movement,” this viewer could not imagine any animal other than highly trained, physically gifted human animals doing movements like this. The male, Yevgeniy Kolesnyk, is alone and moves all parts of his body in disjointed, jerky movements. He discovers Virginia Hendricksen, the female, who appears to be of his species. One could determine that by her ability to match his movement whether upside down or knotted together. For a while, their movements unite them. It is pleasing to see them side by side, moving identically. At the point when they seem to be united, he turns away. That recalls the ending of Jerome Robbins’ dance of the Faun meeting a beautiful female of his species, Dancera Americana, in a ballet studio. The wild forest dwellers also cannot sustain a relationship. Photo: Marc Haegeman 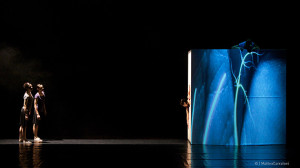 Four Seasons/Le Quattro Stagioni choreographed by Mauro Astolfi for Spellbound Contemporary Ballet, Rome, Italy, appeared over the three nights of Dance Salad. Spring and Summer, March 24, Autumn, March 25, Winter, March 26. The cube and projections upon it were major performers of the ensemble. In Winter, the dancers creep around the side of the cube which is now tilted onto one edge. They look very cold. Fortunately for the audience, they move to become warmer. Their dancing is very fine even though the cube overshadows them. Snow appears on the side of the cube. A hand and face show up inside the snow swirls. The dancers dance well together, and, as in Autumn, there is no obvious relationship to the idea of winter or to the cube, unless they physically interact with it. The men suspend the women over the cube. Do they disappear inside of it? The lights allow us to see one woman inside the cube. She reaches for those outside. The cube turns upside down; its open bottom is visible. The dancers disappear except for one. Arms reach out from the cube. The remaining dancer sees the cube move toward her. She turns away. It comes again. Like the best ghost stories, this dance inspires the nervous laughter of a dark, cold night. Photo: Marco Bravi 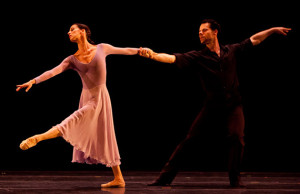