Join us February 28, 6 p.m. for the Choreo-cubator© Showcase. Three participants in the choreography workshop will perform their new work. Exchange ideas with the choreographers. Explore their creative journeys with them. At the Mountain View Masonic Center, 890 Church St., Mountain View, CA 94041. Admission is free; donation appreciated to help us continue to offer opportunities to artists to develop their work and themselves. Refreshments are free. A congenial and fascinating experience awaits you. Just after the last class of the Full Day of Dance©. Here is Rachana Reddy, a lovely dancer of the Kuchipudi tradition of Indian classical dance. She is using traditional movements in new choreography. Wonderful. 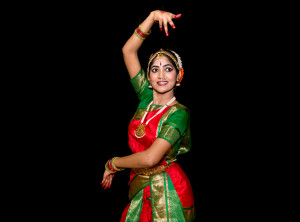 Painting Arcadia is the title of a landmark exhibition of works by French artist, Pierre Bonnard, who lived 1867-1947. The 75 works on display make a gorgeous show. It will be at the Legion of Honor, San Francisco, until May 15. Hedgehog readers should go very soon so that they will have time to go back and see it all again. Oddly, there has been controversy about the title. Should it really be called “Arcardia?” Aren’t there dark notes mixed in with all the sunshine? If he is a great artist, surely he could not be so superficial as to be painting Arcadia? This viewer comes down on the side of the correctness of the title. Arcadia was a mountainous region of ancient Greece whose populace was known for being contented in their simple, pastoral life. The word has come to mean anyplace, real or fictional that offers a peaceful life. Right, it’s not Painting Olympus; we are looking at beauty in ordinary, middle class life. The world near Bonnard was filled with women, croquet players, cats, actually quite a lot of cats. It is a world of humans and so could not possibly be without its dark notes, but they are dark notes within a sunlit world.

Handsome and intelligent, Bonnard could have done well as a lawyer and satisfied his father. He painted instead. In the early years of his career, he identified as part of the self-named Nabis. Influenced by Paul Gauguin, the Nabis found their subjects in everyday life and favored brilliant color. Their title, Nabi, is Hebrew for Prophet. Bonnard was deeply interested in the Japanese prints which made their first appearances in France while he was beginning his work. Their impact shows up in his flattened perspective and planes of color. The cats reflect, if not an influence of the Japanese artists, then agreement on interesting shapes and movement.

Cats and dogs, indulged with treats and taken along on picnics, were an essential part of the life represented by Bonnard and also offered extraordinary liveliness and character to his depiction of breakfast tables and living rooms. His interest in these settings is for their resources as design not for a sociological study. A woman’s blouse matches the design of the wall paper behind her. Part of the whole picture could have the impact of an abstract design even though there are recognizable individuals, chocolate, biscuits.

The overall impression from this writer’s first visit? Color. Bonnard’s world either was full of intense yellows, pink, and the deep, heavy green of summer, or this was the part of his world he chose to celebrate and honor forever. It is a world of white cats stretching on breakfast tables, choosing to pose in the exact spot where their ideal, feline forms will be highlighted by the well lit back drop of the mistress’s checked blouse. The painter’s lover relaxes on a bed, comfortable in her nude body and happily playing with her cats on the bed. A man, we assume Bonnard, stands to one side. Also nude, he is separated from woman, bed, and the happy encounter with the cats by a curtain. The onlooker does not know if he is arriving or departing. His strong vertical self balances the design with the roughly circular pattern made by the woman and the cats. We are allowed to look onto this intimate moment. The man is slightly in a shadow; the woman, looking downward at the cats, is in a warm though not bright light.

Yes, this is Arcadia. Our real world, so full of light, the color yellow, the leafy summer green, dogs, cats, and time for love; what else could it be. Misia plays the piano. Madame lets her cat lick the chocolate off her spoon. Each breath a moment in what may as well be paradise. From June, 2010 to Jan., 2011, San Francisco hosted two extensive, grand shows of French Impressionist art on loan from the Musee d’Orsay, Paris. A surprise star of the show was the collection of works by Pierre Bonnard. The current exhibition offers a unique opportunity to see Bonnard through his life time works. Bay Area museum goers and the many visitors from everywhere else owe Diane B. Wilsey, President of the Board of Trustees, and the late John Buchanan, former Director, a heartfelt, “Merci millefois.” pictures from top: photo of P. Bonnard; The White Cat, 1894; Self-Portrait, young; Woman and Cat, 1912; Self-Portrait, older.

HERE IT IS: Your key to a day of dance. This is the class schedule & price list for the Winter Full Day of Dance. It’s coming soon!!! Register now for a wonderful dancing experience. Share the news with your dancer friends and with the friends who think they can’t dance! Everyone has a great time from pros to beginners. REMEMBER: price per class reduces with each added class.

PRICES:  BEST DEAL & MOST FUN: TAKE THEM ALL!

SPECIAL OFFER: Attend the Choreo-cubator@ Showcase performance for FREE and watch the new works. Your ticket to the Showcase is your receipt for Winter Full Day classes. Enjoy the dances and the FREE refreshments!

Time to register for Choreo-cubator© and Winter Full Day of Dance©. It’s simple: send an email to livelyfoundation@sbcglobal.net, let us know what programs you want to do, Choreo-cubator©, the Winter Full Day of Dance©, BOTH of them or one. Give us your name, email address, phone #, the name and contact information of someone we would contact if we cannot reach you or if there is an emergency. For Winter Full Day of Dance© also let us know which classes you want to take. Here’s a hint: it is only $10 per class if you take all five. An exceptional deal!!!!! Take all five: more fun, more dance, less money. Check out the listing below for more details of the classes. PLEASE NOTE:  IF YOU WANT TO DO THE CHOREO-CUBATOR© BUT THINK YOU WILL MISS THE FIRST SESSION, YOU CAN STILL ATTEND. DON’T MISS THIS GREAT OPPORTUNITY.