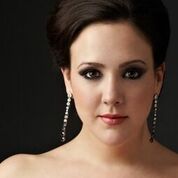 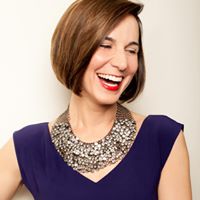 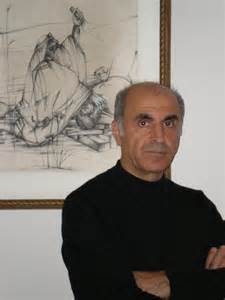 This writer confesses to trying to like music by contemporary composers and mostly not succeeding. A Journey to the End of the Millenium is an exception. The composer calls it a symphonic poem; it was inspired by Bardanashivli’s opera of the same name , but is not a suite from the opera. The music has a dramatic path which captures the listener’s emotions and attention. The opera asked, “What are the mores of society at the opening of the 21st century?” The symphonic poem takes a journey with a woman. About to die, she looks back to her wedding day in a marriage in which she will be the second wife. Bardanashvili draws from deep sources: Moroccan music, ancient Jewish music, classically beautiful music, abrupt sounds. It has a three dimensional texture, like a rich wall hanging made in ikat colors of rubies and lapis; it is sometimes knotty and sometimes silky smooth. Most of all it was interesting, original, full of musical ideas which reached into the imagination and plucked at one’s nerves. Josef Bardanashvili was born in Georgia and moved to Israel in 1995. He is the composer of operas, ballets, and symphonies, music for theater and film.

Ravel’s La Valse changed its character from 1906 to 1919. Ravel intended to write a piece titled Wien (Vienna) in appreciation of Johann Strauss. When World War I began, the composer had not finished it, and his world was not the same. Diaghilev, the ballet impresario, commissioned the composer to complete La Valse. They had had success with Daphnis et Chloe for the Ballets Russes, but Diaghilev rejected La Valse, ending the partnership. The music is violent. One can visualize waltzing couples circling the dance floor, the brilliant chandeliers, the colors of the gowns becoming a blur as they spin faster. Ravel wrote a note for the music which suggests the scene at “An imperial court, about 1855.” Perhaps 1855 signifies a time of the old order, the time before civilization spun out of control and stopped looking like “civilization.” La Valse premiered in 1920. It sounds modern. It is recognizable as a waltz, but it is turbulent and frightening, a refusal of all the grace, ease, and pleasure that a waltz could incorporate. This may have been the best performance of La Valse that The Hedgehog has heard.

And then, the Eroica. Beethoven conducted the first public performance in 1805. On his own, Beethoven over turned the music world’s old order. Symphony No. 3 announced that music could not be the same as before Beethoven. It is bigger than previous symphonies both in its length and the universe it encompasses. It is grander, more powerful and accomplishes more revolutions than those enforced by Napoleon Bonaparte to whom Beethoven had originally meant to dedicate the work. Napoleon declared himself Emperor. Beethoven, yearning for a leader who would make the rights of man the basis of government, was furious at the betrayal. Beethoven changed his mind back and forth on the dedication to Napoleon, but left the name off the final manuscript. This article is being written on Veterans Day. The second movement, Marcia funebre: Adagio assai/Funeral March, is not to celebrate one Great Man. It commemorates each individual whose life was diminished or finished by war. It was played at Mendelssohn’s funeral, another great life lost. Beethoven introduces the lively boldness of heroes, the painful waste of their loss. The rights of man belong to every one; the Eroica is for every individual. Through the individual, Beethoven knows he reaches all humanity. The Eroica ends with a “YES,” Finale: Allegro molto. Having fought his way through loss and pain, the human is still himself and that is the human victory. The Israel Philharmonic and Maestro Mehta presented the Eroica with the musical integrity and passion it requires.

Zubin Mehta, much honored conductor and music director of orchestras around the world, has been with the Israel Philharmonic since 1969. Since 1981 he has had the title, Music Director for Life. The very good news is that he is as handsome and charismatic as ever.