The Lively Foundation salutes our friend, opera singer Mika Shigematsu. She passed away in October, 2019, so soon after receiving a cancer diagnosis, in September. A mezzo-soprano cheered in performances around the world, The Lively Foundation featured an interview with her in the first issue of The Hedgehog, the international arts review, November, 1996. Ms Shigematsu came to San Francisco early in her career and flourished in the Merola program and as an Adler Fellow of the San Francisco Opera. Here is the cover of the issue with the title article: NEW FACES OF OPERA, the introduction, and the interview. It brings tears to our eyes. 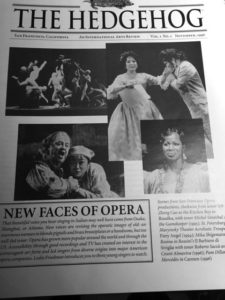 NEW FACES OF OPERA  That beautiful voice you hear singing in Italian may well have come from Osaka, Shanghai, or Atlanta. New voices are revising the operatic images of old: an enormous woman in blonde pigtails and brass breastplates or a handsome, but too well-fed tenor. Opera has grown more popular around the world and through the US. Accessibility through good recordings and TV has created an interest in the extravagant art form and led singers from diverse origins into major American opera companies. Leslie Friedman introduces you to three young singers to watch.*

MIKA SHIGEMATSU: Mika Shigematsu remembers the exact moment she decided to become an opera singer. Watching TV at home in Osaka, she turned the channel to NHK, the national station. The Japanese government broadcast Italian opera from La Scala once every four years, and she had switched it on at just the right time. There were no musicians in her family, no one knew opera, but she decided she must do it.

She played koto and sang in a choir, but she knew she had to learn more. Her school music teacher told her she would need to attend Osaka College of Music. Suddenly, she “needed voice lessons, piano, many tests to enter.” Her family “just hated it” and told her to forget it, but she was persistent. There was only one chance to pass for music college, and she made it.

Looking back, Shigematsu sees the evolution of her own voice. Her success came from working very hard, but also from a breakthrough in understanding how to use her body and voice together to build a new technique. She was not a star in college and took additional lessons to improve. She joined Kansai Nikikai Opera after graduation, but felt that her roles — major ones like Venus in Tannhauser –were not right for her.

She almost gave up. She told her mother she would enter a major competition and either win or quit. She recalls working terribly hard and being embarrassed because she did so poorly. In the process of preparing for the contest, she felt something entirely new develop between her “brain and body.” Rather than quit, she continued and won first prize the next year. She was the first mezzo-soprano to win in 24 years.

She came to the United States in 1989 on a Japanese government scholarship. She studied in New York, where she found part of her training came from hearing many fine artists in concert almost every day. She says her “ear was learning.” Although she was supposed to return after one year, she told her teacher and opera company she would become even better if she stayed longer.

An audition for the San Francisco Opera’s Merola Program was “the key,” says Mika, that opened many stage doors for her–not only to performance opportunities, but “letting me see what I need in the real world.” She was in the Merola training/performing program twice and became an Adler Fellow in 1994, performing the role of Emilia in Rossini’s Otello.

Mika feels that Japanese students may make a mistake by going to Europe for study instead of to the United States. This is where she found real opportunities “to grow, to have the water and sun I need to sing.” 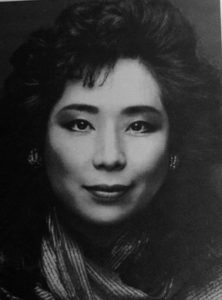 This sprightly young woman with extraordinary vocal power walked through the huge hall of San Francisco’s Opera House before its closing. She claimed that when she first arrived she felt overwhelmed by the place. To Mika Shigematsu’s audience, it seems just the right size for her. (Future performances include debuts in Seattle as Cherubino in LE NOZZE DI FIGARO and in Genoa as Charlotte in WERTHER. She appears as Rosina in IL BARBIERE DI SEVIGLIA in Tokyo and San Francisco.)

*Pictured on the cover are Scenes from San Francisco Opera productions, clockwise from lower left: Zheng Cao as the Kitchen Boy in Rusalka, with tenor Michel Senechal as the Gamekeeper (1995); St Petersburg Maryinsky Theater Acrobatic Troupe in Fiery Angel (1994); Mika Shigematsu as Rosina in Rossini’s Il Barbiere di Siviglia with tenor Roberto Sacca as Count Almaviva (1996); Pam Dillard as Mercedes in Carmen (1996). Interviews with Pamela Dillard and the late Zheng Cao also in The Hedgehog, Vol. 1, No. 1.