Any opportunity to hear Pinchas Zukerman perform is almost too good to be true. His performance with the Budapest Festival Orchestra at San Francisco’s Davies Symphony Hall, January 26, 2015, was truly wonderful. Playing Mozart’s Violin Concerto No. 5 in A major, K. 219, Mr. Zukerman captivated the audience and enjoyed a perfect musical match with the BFO. To see Mr. Zukerman perform is enlightening in this era of show boats flinging arms in the air, bows pointed skyward and, one hopes, not into the eyes of their colleagues. With Pinchas Zukerman, it is all about the music. He stands calmly, listening, and plays whatever dauntingly difficult music as though it is his way of breathing. He is a demonstration that charisma can be found in quiet perfection. 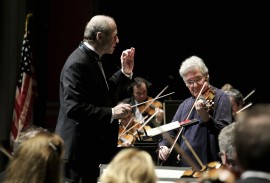 The BFO was a splendid partner throughout, playing Mozart with brightness, clarity, and a sense that they understood what they were doing. At one moment, Mr. Zukerman stood close to the Concert Mistress, Violetta Eckhardt, and leaned toward her and violinist Agnes Biro as though he were making a gift to them as well as playing with them. The program notes that Mr. Zukerman played two cadenzas which were written for him “as a gift by a close friend” and a third which was written by Fritz Kreisler. All three were brilliant, intricate wonders performed with lively perfection. No. 5 is the final violin concerto written by Mozart. It conveys a feeling of continuity and natural beauty that is an awakening to delight. The audience did all but rush the stage to pull Mr. Zukerman away from the exit. He offered the encore, Brahms’ Lullaby, to send his friends the BFO on their way home. He invited Conductor Ivan Fischer to come forward to sing with the audience. Mr. Fischer, sitting in the orchestra, declined, but many in the audience sang, turning the 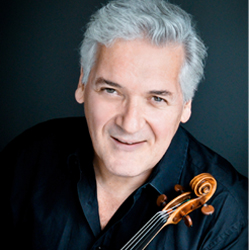 While the Violin Concerto, No. 5 is said to have been written in 1775, Mozart’s opera, The Magic Flute, was written in 1791 and premiered just two  months before his death at age 35. The January 26 performance opened with the Overture to The Magic Flute. It was interesting to begin the concert with an overture, meant to start us out, which is also an ending as it came so close to Mozart’s death. It contains all the spritely, mysterious, serious, and silly characterizations that appear in the opera. The Magic Flute presents an allegory of a prince who must go through trials to learn about good and evil before he can become who he is: a man meant to rule others. It creates an enchanted world which leads the audience to follow a playful bird catcher whose fun and adventure seem much more important than any philosophy. It was a brief but apt introduction to the program of work by the two greatest prodigies of Western classical music, Mozart and Mendelssohn.

The Budapest Festival Orchestra’s performance of Selections from Incidental Music for Midsummer Night’s Dream, Op. 61, was fantastic both in the musical representation of fantasy and the magnificence of their performance. They were joined by Anna Lucia Richter, soprano, Barbara Kozelj, mezzo soprano, and the Pro Musica Girls Choir, directed by Denes Szabo. Ms Richter and Ms Kozelj were stunning singers; the charming Choir sang very well.Together with the BFO they created a world of music inhabited by two worlds of creatures, the human and the spirits, elves, fairies. Actually, three worlds because there is the man who becomes a donkey (an ass); there are the lost lover humans and the “rough mechanicals” humans. There are the fairy King and Queen and the many kinds and ranks of other fairies. The music also is rich in life: the hee haws of Bottom, busy, flying fairy sounds, the beatific theme that is the wedding of all. It is a world of so many worlds and so many creatures, flowers, plants. Mendelssohn and now Ivan Fischer have given us a gift even beyond what Mendelssohn conceived at age 17 and a half when he made this particular masterpiece. We who are now its audience live in a world watching extinctions go past us like a medieval parade of death. The world once crowded with myriad forests and enriched with busy fantasies is being simpled down, clear cut, with species narrowed down to a few representatives in museum like zoos. Then here comes Mendelssohn’s Midsummer’s Night Dream to remind us of the rich diversity of life bounding, swarming, creeping,hopping around us. Once again, Maestro Fischer led his BFO in an a capella encore.

This time, a lovely song by Fanny Mendelssohn Hensel, Felix’s gifted sister. Maestro Fischer’s conducting style involves many movements. In one which caught my eye more than once he raises both his arms in a rounded shape reaching up. I took it as an act of benediction for the music, his orchestra, his audience, and I was grateful for it, too. pictures: from above: Pinchas Zukerman, Ivan Fischer leading the BFO with P. Zukerman,P. Zukerman, Felix Mendelssohn, Fanny Mendelssohn Hensel.